Sunday 5th – along the coast road to N Berwick, then via Whitekirk to Tyninghame, and back by E Linton and Haddington (54 miles).

Sunday 12th – from Musselburgh via Drem to N Berwick, then down to E Linton, and back via Haddington and Pencaitland.  48 miles

Sunday 19th – up Carberry, then south to Pathhead, Fala, over the Soutra road and down to Stow in heavy rain, then back up the back road to Heriot and home via Pencaitland.  57 miles.

Sunday 26th – on a wet and windy day, we did a loop through E Lothian, taking in Pencaitland, Haddington and N Berwick.  45 miles.

Sunday 2nd – south into the headwind to Temple, Gladhouse and over the Meldons, then back, at twice the speed, via W Linton and Penicuik.  58 miles.

Sunday 9th – the biggest group ever on a Sunday (22) rode out to Gorebridge and the A7, then over the hill to Soutra, and back by Humbie and E Saltoun (46 miles).

February 2014 – regrouping at the top of the hill, Soutra

Sunday 16th – round the south of Edinburgh, then from Currie to Kirknewton, Uphall and then Linlithgow, and back via Winchburgh, Kirkliston and Ferry Road (54 miles).

Sunday 23rd – we battled the headwind to Middleton and Temple, then got blown along to Humbie and Gifford, and finally back with a cross-wind via Pencaitland and Tranent (56 miles)

Sunday 9th – from Pathhead via Crichton and Heriot to Stow, over the hill to Lauder, then back via Carfraemill and Humbie (60 miles).

Sunday 16th – via Bonnyrigg and Roslin Glen to Carlops, then back by minor roads to Gladhouse, Gorebridge and Pathhead (55 miles).

At the Dalriada, for St Patrick’s day pageant, March 2014

Saturday 22nd – 5 club riders went to Glasgow to try out track riding at the Chris Hoy velodrome – it was a blast! 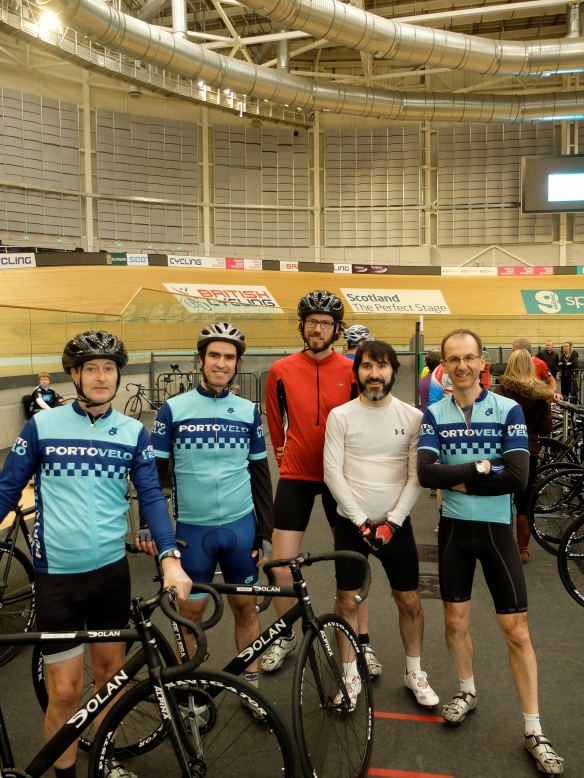 Sunday 23rd – via Leadburn, over the Meldons then round Cademuir Hill to Peebles, along to Innerleithen, back over the Granites, home via Heriot and Pathhead.  75 miles.

Sunday 30th – via Fa’side to Gifford, then past Haddington to E Linton and home via Whitekirk, Athelstaneford and Longniddry. 53 miles.

Sunday 6th – the fitness ride went into E Lothian and from Longyester up Redstone Rigg, and back by Garvald and Gifford, 56 miles. The “nice ‘n’ steady” ride did a loop into E Lothian, with a cafe stop in Haddington, 34 miles.

Sunday 13th – via Carrington to Peebles, along to Innerleithen, then back through Walkerburn, Stow and Heriot, with faster and slower groups on the final leg. 70 miles.

Sunday 20th – on a brilliantly sunny day, we went via Pencaitland and Stenton to Dunbar, then back by Tyninghame and Drem. 60 miles.

Monday 21st – for the year’s first family ride, a large group of children and adults rode down to Musselburgh, along the River Esk, and back through Newhailes, with a spot of football along the way!

The family ride reaches the end of the River Esk path, April 2014

Relaxing on the family ride, April 2014

Sunday 27th – on the club’s 2nd anniversary, we went up Fa’side hill, then via Pencaitland and Longyester to Garvald, E Linton and N Berwick, then fast back along the coast road (57 miles).

Saturday 3rd – our second trip to the Sir Chris Hoy velodrome in Glasgow, some of us doing the first accreditation session, some the second. 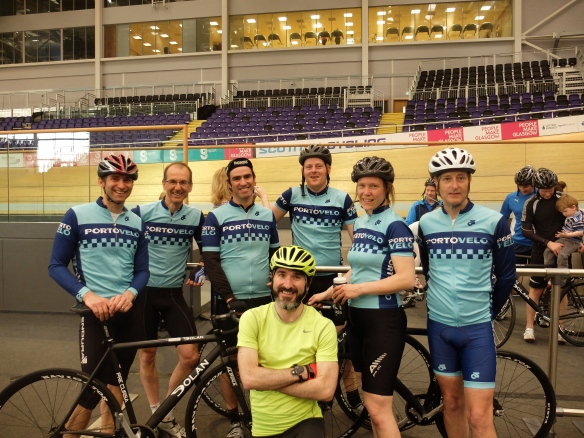 Sunday 4th – the fitness ride went straight through town to Balerno, along the Lang Whang, via Newbigging and Dunsyre to W Linton, and fast home from there, 66 miles. The nice ‘n’ steady ride went up Carberry and on to Gifford, then Haddington, and back by the coast road, 45 miles.

Sunday 11th – for the first longer ride of the year, we did the classic “2 bridges” ride – via Ratho, Bo’ness and Grangemouth, over the Kincardine Bridge then along the Fife coast via Culross and Rosyth, and back over the Forth Bridge, 75 miles.

Sunday 18th – a hilly ride, taking in Roslin Glen, Carrington, the Granites, Heriot, the climb up to Gilston, then back via Humbie and Cousland.  57 miles.

Sunday 25th – inland to Edgehead and Pathhead, then east to E Linton, and back via Haddington and Pencaitland … then in the afternoon, a small group of adults and children braved more rain on the family ride along the railway path from Carberry to Pencaitland and back, ending in a downpour!

Sunday 1st – the ride went to Broughton, with some riders carrying on all the way to Tala Reservoir for a 99 mile round-trip.

Sunday 8th – a hilly ride, starting with Fa’side Hill, then from Garvald the long, steep climb to Whiteadder Reservoir, back down Redstone Rigg to Gifford, and home via the Saltouns, 57 miles.

Sunday 15th – via Carberry, Middleton and Gladhouse Reservoir to Peebles, along to Innerleithen, back over the Granites and home via Heriot and Pathhead. 68 miles.

Saturday 21st and Sunday 22nd – for the 2014 weekender we travelled on Friday to a remote self-catering house a few miles outside Aviemore.  On the Saturday, we headed NE through the Abernethy Forest, E to Tomintoul and up to the Lecht ski centre. After descending again the same way, we then did a big loop up into Speyside, calling in at the Glenlivet distillery and back down through Grantown-on-Spey and Nethy Bridge (84 miles).  On the Sunday morning, we headed north over the moor, past Lochindorb, back down to Grantown, returning via Boat of Garten (46 miles).  A great weekend of cycling, despite grey skies and a few showers. 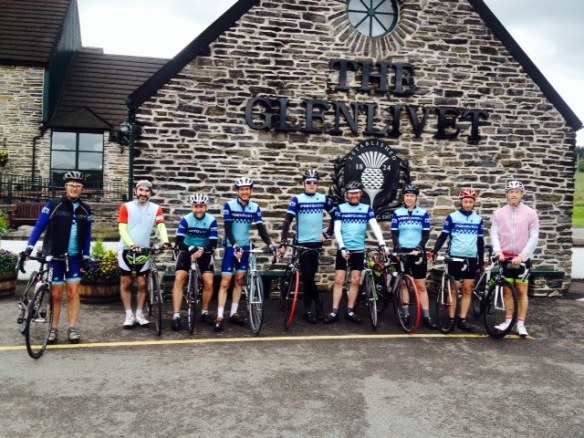 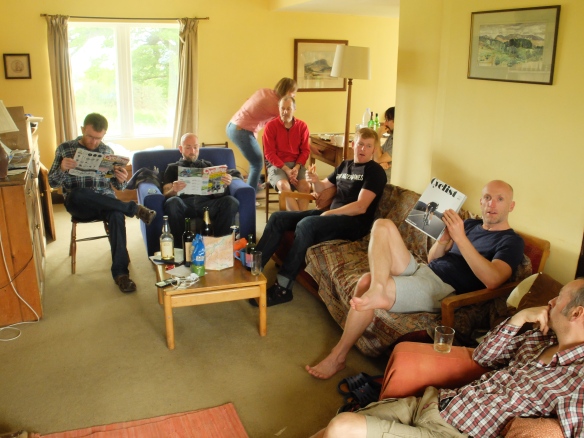 Weekender 2014 – relaxing after the ride

Sunday 22nd – A small group left from Portobello and went via Gladhouse to Peebles and Cademuir, then back by W Linton and Penicuik (65 miles).

Sunday 29th – quite a hilly ride: up to Edgehead, via Pathhead and the Saltouns to Beech Hill, then Stenton, Tyninghame and home via Athelstaneford (61 miles).

Sunday 6th – on the 2nd day of the Tour de France, while the pros were still eating their Yorkshire breakfast, we were riding out through Penicuik and down to W Linton.  After the cafe, we went on to Rommanobridge, over the Meldons, and back by Gladhouse and Temple (63 miles).

Sunday 13th – as the Tour hit some bigger mountains, we went over the Granites, along by the Tweed, then up Thornielee, over to Stow, back up the A7 and home via Crichton and Pathhead (70 miles).  In the afternoon, the family ride went along the railway path from Longniddry to Haddington.

Sunday 20th – a big group went up to the A7, over the Gilston/Soutra road, then over to Gifford for a cafe stop and home

Sunday 27th – heading south-west initially, we went via Roslin Glen and Penicuik to the cafe at Whitmuir, then over the Meldons (in the rain) and back via Gladhouse and Gorebridge (65 miles)

Sunday 3rd – the fitness ride went to Humbie and Gifford, from where most of the group went on up Redstone Rigg, back to Garvald and home via E Linton (64 miles).  The nice ‘n’ steady ride also went to Gifford via Pencaitland, and back via Haddington and Longniddry (41 miles).

Sunday 10th – up Fa’side hill, through Pencaitland, Stenton and Spott to Dunbar, back to Tyninghame, then home (in heavy rain) via Aberlady, 61 miles.

Sunday 17th – a 70-mile ride over the Meldons, via Stobo and Dreva to Broughton and back by Skirling and Leadburn.

Sunday 24th – round the city outskirts to Balerno, past Harperrig Reservoir, then right to Tarbrax, Addiewell, Bathgate, Linlithgow and back by W Binny, Ratho and Currie (75 miles).

Sunday 31st – to Stow via Pathhead and Heriot, over the hill to Lauder, and back by the A68 and Humbie (60 miles)

Sunday 7th – a fast ride, out along the coast to N Berwick, then via Whitekirk, E Linton and Humbie to the A68 for the cafe stop, and back via Fala (60 miles)

Sunday 14th – up Fa’side hill, via the Saltouns to Longyester, E Linton and Tyninghame, and back via Athelstaneford (54 miles). In the afternoon, 5 children and 6 adults rode along to Musselburgh and along by the Esk, where we ran about and picked brambles.

Sunday 21st – the group went out by Gladhouse and W Linton, then over the first part of the Granites and back via Heriot, 75 miles.

Sunday 28th – on a mild day, we went via Ormiston, the Humbie road and Tynehead to Heriot, down to Innerleithen (fast), via Traquair and Peebles, back to Leadburn (fast) and home – 70 miles.

Sunday 5th – the end of season “century challenge” ride – via Gifford and Redstone Rigg to Duns, then nearly as far as Kelso, before heading back via Earlston, Lauder and Humbie, with an extra loop to Pencaitland and Longniddry to get the total up to 100 miles. The nice ‘n’ steady ride went up to Gifford and back by Haddington (35 miles).

The century ride, October 2014 – Smailholm in the Borders.

Sunday 12th – a beautiful autumn day, and we went to Leadburn, over the Meldons, up to Blyth Bridge, W Linton and home via Penicuik and Roslin Glen (65 miles).

Sunday 19th – to Peebles via Gladhouse, then along to Innerleithen and back over the Granites (71 miles).

Sunday 26th – via Edgehead and the first half of the Granites to Heriot and Soutra, then back by Bolton and Samuelston – 58 miles.

Sunday 2nd – a big group went via Dalkeith and Crichton, Fala and Humbie to Gifford, then Haddington and home – 51 miles.

Sunday 16th – round the city to Currie, via Ratho to Linlithgow, back by S Queensferry (51 miles)

Sunday 23rd – via Dalkeith and Roslin to Carlops, then back by minor roads, Gladhouse and Gorebridge (54 miles)

Sunday 30th – a beautiful sunny day, and we went via Dalkeith and Middleton to the Granites, down to Heriot, over Soutra, and back by Pencaitland (50 miles)

Sunday 7th – Bonnyrigg, Roslin, Penicuik, W Linton, back by Lamancha and Leadburn, in a mixture of sleet and sunshine (47 miles)

Sunday 14th – up Carberry, over to Gorebridge, then a skinny loop to Stow, out along the A7 and back on the coach road (50 miles)

Sunday 21st – from Inveresk, the group went to Cousland, Fala, Tynehead, up the A7, back over the Gilston/Soutra road and back via Humbie (46 miles)

Sunday 28th – on a perfect winter’s day, we went along the coast road to N Berwick, round to Tyninghame and back by Athelstaneford and Markle (49 miles)