Sunday 22nd The inaugural ride saw a great turnout, with two groups doing loops into East Lothian, both including a cafe stop in Haddington.  The longer ride covered about 55 miles, the shorter one 38.  Longer route: http://connect.garmin.com/activity/170614956

Inaugural ride – gathering at the Prom 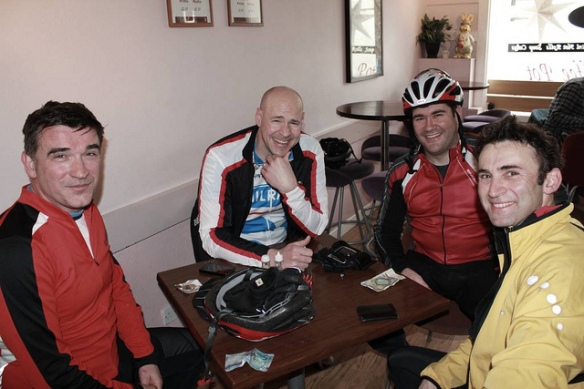 In the cafe at Haddington, inaugural ride, April 2012

Sunday 29th – The group headed east into the wind and biting rain before splitting into two at Ballencrief. The weather quickly improved and the longer ride covered 59 miles in just under 4 hours, whilst the shorter ride covered 38 miles, just under 2.5 hours.

Sunday 6th – The group headed inland to Gifford, via a number of hills, before splitting.  The shorter ride headed home by a direct route (around 40 miles in total), while the longer ride returned via East Linton, clocking up 56 miles or so. An enjoyable ride despite some heavy rain.

Regrouping at the top of the hill just before Humbie, 6 May 2012

Sunday 13th – Hilly ride, out via Humbie to Soutra, back by Heriot and Pathhead.  53 miles.  Very windy – two riders managed 45 mph coming down off the Granites!

Sunday 20th – A flatter ride this week, out via Drem and Whitekirk to Dunbar, back via Stenton and minor roads to the S of Haddington.  58 miles.  The group split on the way back into faster and slower groups.

Sunday 27th Avoiding the Marathon route, the group headed inland to Peebles, via the Meldons and the minor road round the back of Cademuir Hill.  Just over 60 miles in wall-to-wall sushine – a perfect cycling day!

Saturday 2nd Family ride on the railway path from Longniddry towards Haddington.

Sunday 3rd The group headed south to Lauder, via Gorebridge and the minor road beside the A7, back on the A68, then minor roads by Humbie.  58 miles.   http://connect.garmin.com/activity/188282190

Sunday 10th On a damp day, the shorter ride went out to Gifford and then back from there, while the longer ride went on a hilly loop to East Linton before heading home.  Longer route (59 miles):  http://connect.garmin.com/activity/188282050

Sunday 17th Undaunted by the rain, the group did a 57 mile loop round Edinburgh to the south, then back by a series of hilly minor roads.   http://connect.garmin.com/activity/189875552

Sunday 24th The group went over the Granites (Moorfoots) then down the Heriot road.  A shorter group turned back from there, while the longer group went a few miles south on the A7, then over by Soutra to the A68 and back via a loop into E Lothian (55 miles).

Sunday 1st Starting in the rain and ending in sunshine, we did a long skinny loop out to Dunbar (via Whitekirk and then, er, Whitekirk again) and back a bit further inland, splitting into faster and slower groups.  Around 60 miles in total.

Sunday 8th On a cloudy and sometimes rainy day, we had a hilly start out to Pathhead and Fala, then east to Bolton.  One group headed back from there via Samuelston, while another went on to E Linton and then back via Athelstaneford and Longniddry (56 miles).

Saturday 14th A shorter ride aimed at less experienced riders, this headed inland via Tranent to Pencaitland and East Saltoun, then back via minor roads to Longniddry and the coast road home.

Sunday 15th We headed south to Pathhead, then over to Heriot.  At the T-junction with the Granites, one group turned back (around 40 miles), while the other group went down to Innerleithen, along to Peebles and back via Temple (65 miles).

Sunday 22nd Out via Athelstaneford, then down to North Berwick and back along the coast road for an earlier finish (45 miles)

Sunday 29th A skinny loop mostly through E Lothian countryside but culminating in the big climb up Redstone Rigg, then back on the minor road to Stenton/Garvald.

Sunday 5th The longer ride went out to Pencaitland, then by back-roads to Tyninghame and North Berwick, and home along the coast road (57 miles), while some riders took shorter options back.

Saturday 11th Family ride on the railway path from Crossgatehall to just beyond Ormiston, and back.

Sunday 12th A hilly ride out to Humbie (where some riders took a shorter route home via Haddington) then over the Soutra road and over from Heriot to the Granites and back via Gorebridge (51 miles).

Sunday 19th Out to Leadburn and south towards Peebles.  One group turned back on the Gladhouse road for a shorter ride, while the other group went over the Meldons and over to W Linton and back via Penicuik (60 miles). 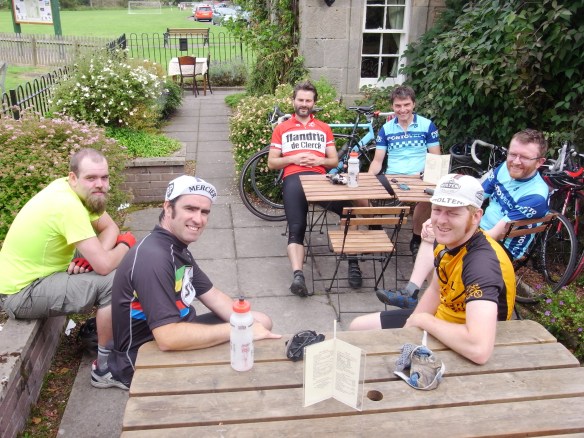 Sunday 26th A flatter and faster ride, out through Pencaitland and Gifford, then south of Traprain Law to E Linton, Tyninghame, North Berwick and home along the coast (55 miles).

Sunday 2nd We headed south via Penicuik and West Linton to Peebles, then back by Eddleston and Leadburn – sunshine and a tailwind home (59 miles)

Sunday 9th On a bright day we went down the Humbie road to the A68, south to Lauder and the cafe, then over the moor to Stow and back via Heriot and Pathhead (58 miles)

Sunday 16th Out via Bonnyrigg to Peebles, along to Innerleithen via Glentress and Traquair, then back over the Granites with a tailwind.  Faster and slower groups on the return leg (67 miles).

Sunday 23rd A big group headed out in brilliant sunshine via Tranent, south of Haddington and up to Garvald.  Some turned back from there, while the rest tackled the tough climb up to Whiteadder Reservoir, then back down Redstone Rigg to Gifford and home (54 miles).  Route here: http://connect.garmin.com/activity/225921080

Sunday 30th On a wet and windy morning, we headed round the south of Edinburgh then into West Lothian, over the Bathgate Hills to Linlithgow, and back via Queensferry and Dalmeny.  53 miles.

Saturday 6th Family ride to Musselburgh and along the River Esk path – where we picked brambles and played pooh-sticks before heading home. 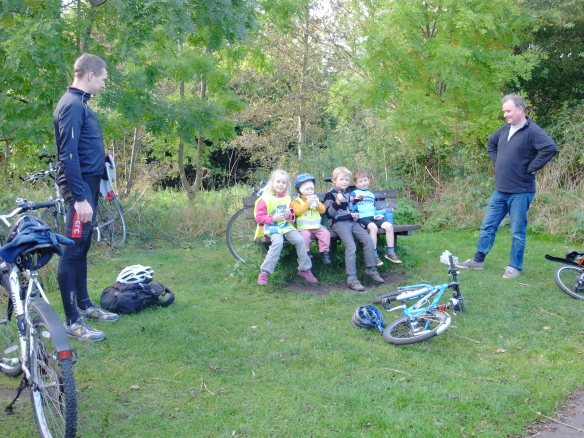 Sunday 7th On a beautiful autumn day, we headed south to Pathhead and Crichton, over the Gilston/Soutra road, then via Humbie and Samuelston to near Haddington.  We split into faster and slower groups for the final leg home.  50 miles.

On the Gilston/Soutra road, October 2012

Sunday 14th Out to Dunbar via Gifford and minor roads to Spott, then back by Tyninghame and Drem.  Sunshine at first, then torrential rain.  Faster and slower groups from Drem. 61 miles.  Route: http://connect.garmin.com/activity/233525808

Sunday 21st We headed out along the coast road to N. Berwick, then south by minor roads to E. Linton and then Gifford, and back via the Saltouns – all on a sunny, almost windless day. 59 miles.  Route: http://connect.garmin.com/activity/236220426

Sunday 28th On a damp day, we headed south via Leadburn and Rommanobridge to the Lyne Valley, then over the Meldons and back via Gladhouse and Temple.  58 miles.

Sunday 4th A cold start as we set out along the coast road, then inland on minor roads to Tyninghame, returning via Haddington and Longniddry in fantastic winter sunshine.  Faster and slower goups home.  51 miles.

Sunday 11th The group went round the edge of the city to Balerno before heading out on the Lanark road (the Lang Whang), then round by Dunsyre to West Linton, and home via Penicuik.  64 miles.

Sunday 18th We went out via Roslin to Leadburn, then to Edleston for a cafe stop, and back via Gladhouse, Crichton and Ormiston.  The theme was short steep hills and castles.  56 miles.

Sunday 25th Despite heavy rain, a small but brave (foolhardy?) group headed out via Currie and Wilkieston and the Bathgate hills to Linlithgow, then back via Winchburgh and Kirkliston.  54 miles.

Sunday 2nd On a freezing but sunny day, the group went out along the coast road to North Berwick, round by E Linton and back by Haddington and Pencaitland.  53 miles.

Sunday 9th Another cold day, so we again avoided the minor roads which might be icy.  We went west and south to Leadburn then looped round by the Lyne Valley to Peebles, then back up the main road.  60 miles.

Sunday 16th The group went out via Edgehead and Ford to Crichton and the A7, then over the Gilston/Soutra road to the A68 and via Humbie to Gifford.  53 miles.

Sunday 23rd On a wet and very windy day, a small but hardy group headed south via Leadburn as far as the cafe near Eddleston before heading back via Gladhouse and Temple.  43 miles.

Sunday 30th For the last ride of the year, we went south to Humbie then Lauder, and back via Pathhead and Edgehead.  55 miles.